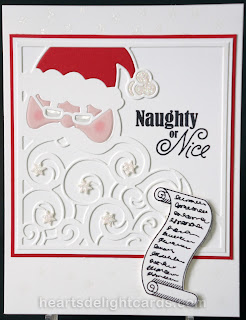 Another little taste from the upcoming Holiday Catalog, and this one is so fun! The Greetings From Santa stamp set pairs with the Detailed Santa Thinlits Dies, which can also be bundled for extra savings. My first thought when I saw the die was to make a shaker card, which I did. Unfortunately, I didn't like the way it turned out (but at least I know what NOT to do next time)!

My second thought was a white on white card, but it is so hard to get a good photo! It took a dozen shots before I got the angle of light right, so you can actually see the detail. I love his swirly beard! Doing inlays for his hat and face was a fun twist. For his skin I used Blushing Bride, which was rather dark, so I put a layer of vellum over it to tone it down some. Worked like a charm! A bit of Flirty Flamingo on a Q-tip added some blush to his cheeks. He even has window sheet "lenses" in his glasses!

It's hard to see, but there's some subtle detail in the white spaces above and below the Santa panel. Using one of the stamps from the set, I added a dusting of heat-embossed clear stars/snowflakes. Can you see 'em? And yes, those are Dazzling Diamond snowflakes in his beard! 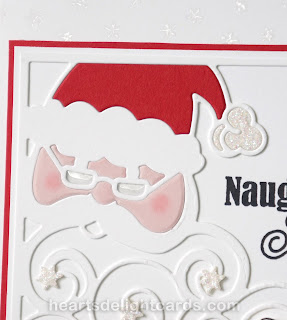