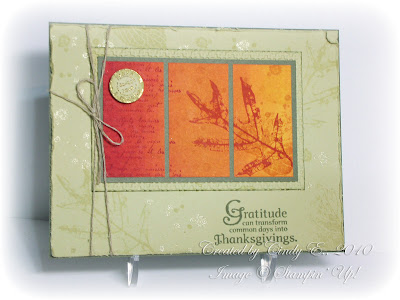 Today's card is going to a special lady who has been sharing her work load with me for the past week and a half, and for that I am truly grateful!  The extra $$ is most appreciated.  The greeting on this card is a wonderful reminder that we should count our blessings every day, not just on the holiday set aside for it. :-)

I brayered  Daffodil Delight, More Mustard and Cherry Cobbler onto Very Vanilla CS, then stamped the images using More Mustard, Cajun Craze and Cherry Cobbler. The postage cancellation was stamped with VersaMark on River Rock CS, heat embossed with gold EP, cut out and popped up on a dimensional.  The background was stamped (by stamping off once) with River Rock ink on River Rock CS, then the extra "splats" were added using Champagne Mist Shimmer Paint. 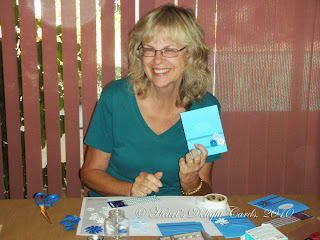 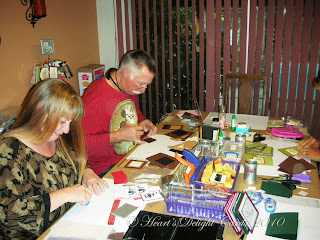 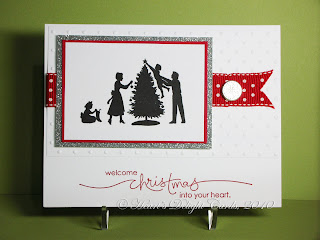 This was the card kit my sister worked on.  She was introduced to the Big Shot, and really had fun cranking out the embossed pieces.  She wants to make more cards, too!
Posted by Cindy at 2:14 AM 1 comment:

Birthday Bash and a Birthday :-) 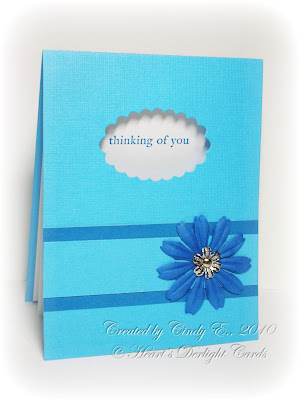 The Operation Write Home Birthday bash last Friday was a wonderful success.  Eight crafty Patriots showed up to make cards for tour service members to send to their loved ones.  We made a total of 126 cards, and there are still more card kits to be put together!  I am so happy to be a small part of this organization.  The card above is so simple, yet elegant.  One of the ladies had never stamped before, and she picked it right up!  Didn't she do a great job?  Her "thinking of you" sentiments were perfectly placed! 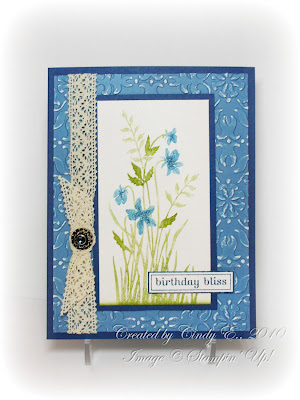 Now on to another birthday celebration.  My daughter-in-law has a birthday tomorrow (and will officially be pushing 30 for the next year!), and this is the card I made.  We celebrated her birthday on Saturday so there could be a big family gathering.  I tucked a couple of Macy's gift cards inside, since that's her favorite store. :-)
Posted by Cindy at 1:00 AM 7 comments: 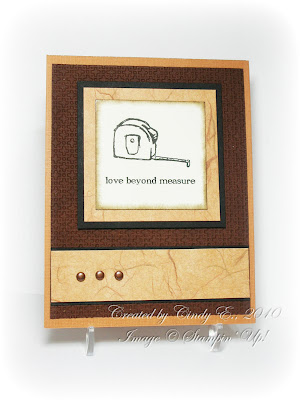 I've been preparing for tomorrow's Operation Write Home Birthday Bash Card Party all week.  Here are a couple of cards that I made kits for, so people with no stamping experience can put them together.  Since this is not an official Stampin' Up! function, I am trying to use up a bunch of the non-SU things I got before I realized what I was doing.  I have a ton of stuff to use up, and that's all I'm going to say about that. ;-) 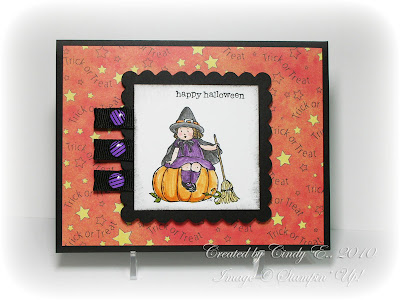 Does anyone know how I can add about 12 more hours to today?  The party is tomorrow and I'm nowhere NEAR ready - eeeek!  More kits to cut, house to clean, refreshments to make (and not enough room in the fridge for them), and somewhere in there I need to bathe!
Posted by Cindy at 2:19 PM 8 comments: 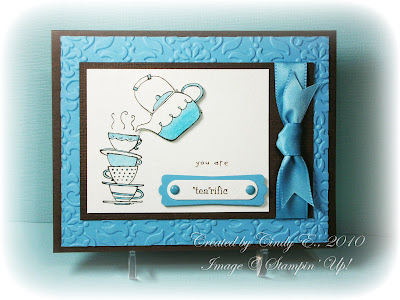 Ahhhh,  nothing like a short week after a long weekend.  It's like the icing on an already delicious cake.  (Mmmmm, cake....)  We had ribs and beans and potato salad yesterday.  What did you have?

Today's card features more stamps from the Morning Cup stamp set.  I just love that set because it's another one you can use for just about any occasion.  I had to fudge a little and use a couple of words from the Birthday Bakery Level One Hostess set.  See the words "you are" right above the matted greeting?  Those are in the hostess set on the stamp that says "if you are what you eat, eat something cute!"  I inked just the words I needed with a Stampin' Write Marker.

THIS is the card I used for inspiration. 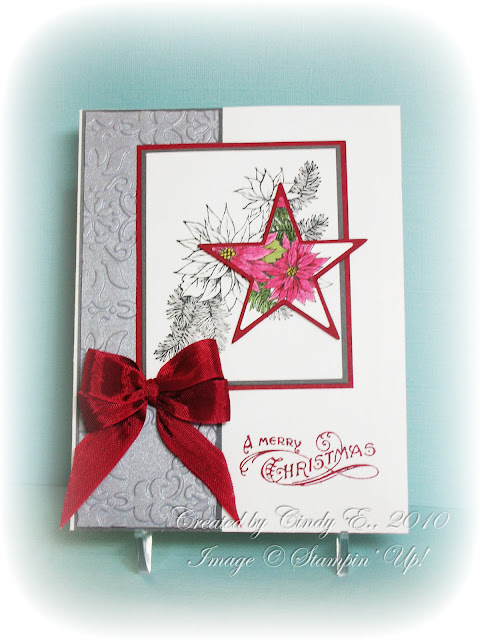 Trying something a little different with the spotlight technique today - instead of the customary circle, I tried it with a star.  I think it turned out pretty well, but I have an even better idea for the next card. :-D  BTW, the poinsettias were colored with Cherry Cobbler Classic ink and a blender pen.  I don't have a clue why it looks pink in the photo.

I'm keeping the post brief today (hey, wait a minute.....did I just hear some of you cheer?!). I hope you all have a wonderful long Labor Day weekend.  Those of you with children in school, if they haven't started already, they surely will next week, so enjoy your upcoming free time! Woohoo!!! 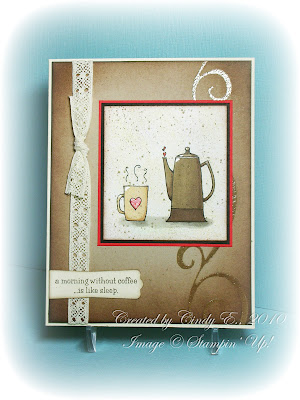 My school teacher daughter discovered the joys of Starbucks recently, so I just had to make this for her.  (I hear the teachers in the English department take turns making Starbucks runs.)  :-)

She's back in the classroom this week getting things ready for when the high school hooligans students return next week.

See that cool swirl up the side of the card?  I used the leftover piece from when I cut the swirl for this card, like a stencil.  Using a sponge dauber, I "stenciled" some VersaMark ink along the edge.  It looked pretty good as a watermark, but I thought it would stand out more if it was heat embossed with clear EP.  Kind of reminiscent of a steam swirl, don't you think? 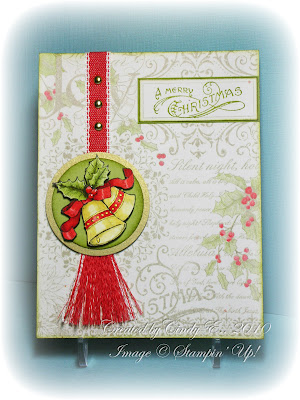 CHRISTMAS!  The new 2010 Holiday Mini is open for business now (insert me doing a happy dance!), and I positively adore the way the vintage Christmas stamp sets all coordinate with one another.  The bells and sentiment on this card are from the Bells & Boughs set, and the Sahara Sand background image is Christmas Collage.

The bell image was stamped in Basic Black Classic ink on watercolor paper, and blender pens dipped in the lids of the classic ink pads were used to color it. Gold Lame Smooch Accent Ink was added to the bands around the bells and on the clapper.  (You can click on the picture twice to really see the details.)

The holly berries were made shiny with Crystal Effects.  After it was dry, I carefully cut it out and popped it up on Dimensionals on a Pear Pizzazz circle (with the edges inked in Old Olive).  That, in turn, was matted on a Brushed Gold circle, which was also popped up on Dimensionals.

The stamped background was colored using just a touch of ink with the blender pens (I wanted a faded look).  That Poppy Parade Stitched-Poly Ribbon is a breeze to fray! 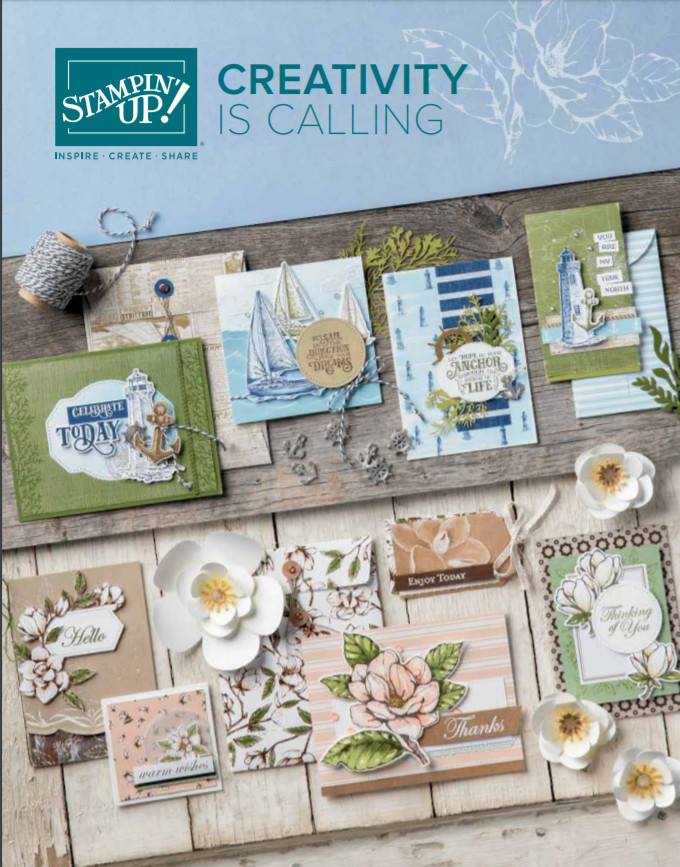 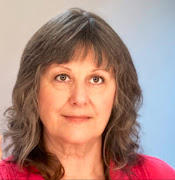 Happy wife, mother of two, grandmother of two, and mom to two furkids & 15 chickens. Blessed to be living and loving the country life!