Reason for the Season 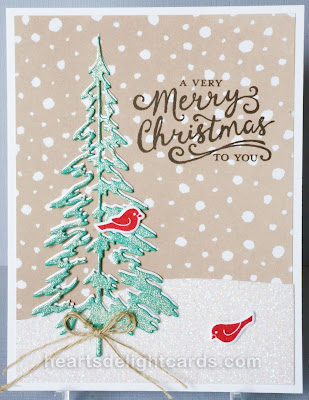 The stash of Christmas cards is growing, but not nearly quickly enough! Next week I'm going to have to settle on one or two designs and mass produce a couple dozen of each to make up for lost time. They'll have to be fairly quick and easy. This one is nice, but it would take two passes through the Big Shot for each card, plus a bunch of meticulous use of the Fine-Tip Glue Pen. That, and the fact that I don't have enough of the DSP makes me think this one isn't for mass production. So if it ends up in your mail box, just appreciate that it's a one-of-a-kind creation from yours truly!

This is the other tree in the Tim Holtz Woodlands Thinlits. It's narrower than the first one I used. After the Emerald Envy tree was glued over the Whisper White one (offset a bit), it was brushed with clear Wink of Stella. Lots of shimmer going on there! The birds are from the now-retired Thoughtful Branches bundle. 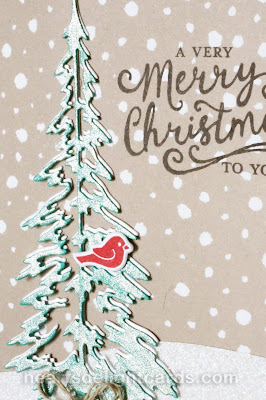 Linen Thread
Posted by Cindy at 3:30 AM