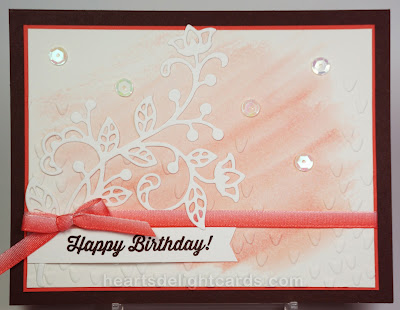 At the rate I'm going, I'm never going to get done using up the bits in the BOUB! Well, at least I used two more pieces on this card.....eating that elephant, two bites at a time, LOL.

This time it's the water colored and embossed background, and the flourish die cut. I don't recall what I had originally planned to do with the background, but I do remember trying the flourish die cut in various neutrals for the card I had in mind, only to scrap the whole thing because it wasn't working out. Since I still need at bunch more birthday cards, I added a birthday banner (from Birthday Banners, coincidentally). See that gorgeous Calypso Coral ombre ribbon? That's in the Cupcakes & Carousels embellishment kit. It's swoon-worthy! 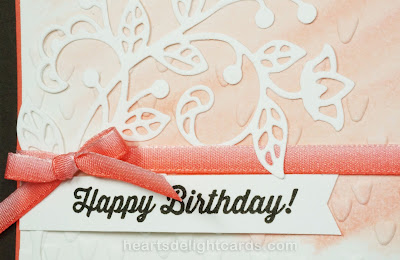 I made this card last Wednesday, when we were having some heavy rain and wind. There was a possibility of severe thunderstorms, which didn't happen, fortunately, though that weather system did produce tornadoes elsewhere. Crazy stuff. I never had to worry about tornadoes when we lived in California. Now earthquakes....that's another story!

The hubs and I decided the safest place to be if there's a tornado coming is in my craft room closet, which is under the stairs to our bedroom. It's very solidly built and there is room enough for us both plus our dog and cat. I guess if it's my time to go, what better way than surrounded by the things I love; my hubby, our fur kids, and my stamps, LOL.