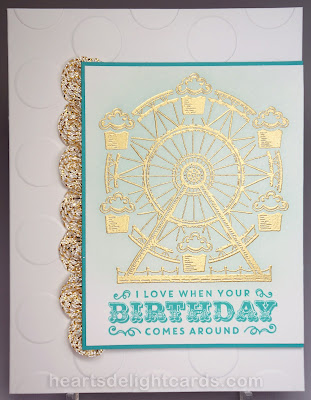 The other day, when I made the gold embossed carousel horse card, I also embossed the Ferris wheel in the Carousel Birthday stamp set, thinking I could incorporate it somehow. That didn't pan out, so I saved it to use later. And later is TODAY!

I loosely used the Freshly Made Sketches sketch for this week. The size is all wrong, as is the embellishment on the left side, but at least it gave me a starting point!

This is the first time I've played with the 3/8" Metallic Ribbon that's a Sale-A-Bration freebie. I really like it, not only because it's shiny, but it has a soft feel to it and makes lovely bows. But today I played around with it to see if it was easy to ruche, and it WAS! It's super easy to grab a couple threads on one side, pull them up, and scrunch the ribbon into a scalloped shape. I was surprised to see the threads ran in a wave pattern, rather than straight along the side. That's what made the awesome scallops! To keep the threads from pulling out after I got it just the way I wanted it, I used the Fine-Tip Glue Pen across both ends and let it dry before cutting it off the roll. Worked like a charm!