Okay, I have to tell you the story behind this card that was made for my sweet husband. He's a kind of low-key, calm sort of fellow, and not very vocal about expressing his love for me; a fact that used to bother me when I was much younger. He'd say those three little words sometimes, but not nearly as often as I longed to hear them.

Fast forward a few decades, and I am older and, I hope, a bit wiser. I can see now all the ways that he has shown his love and appreciation for me through the years. And actions speak much louder than words. I have seen friends in relationships where their guy would say it, but then treat them like dirt. Actions, people!

So, one of the myriad of ways, big and small, that he has shown me he loves me is by building a new set of steps to our home. The last time my mom visited, she had difficulty getting up the steps, which were quite a bit steeper than the building code allows. Before she came for this visit, he researched and planned and built lovely wide, shallow steps so Mom can make it up on her own. And then painted them and added the non-slip stuff so they are safe. I love that man.

I used this awesome sketch from Freshly Made Sketches to "build" the card: 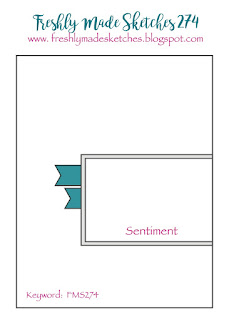