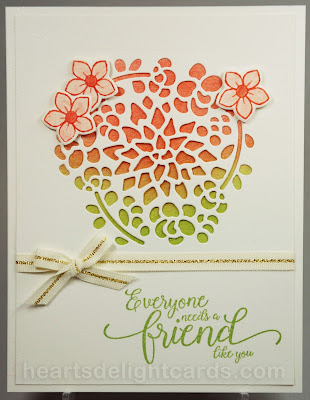 Here it is only the third week of January, and I'm already dreaming about Spring. I told my husband the Redbuds should be blooming in about eight weeks, and we haven't even had any real snow, yet!

Since I had it on the brain, the fresh colors of Spring made an appearance on this card, from the sponged background behind the Window Box die cut, to the adorable little flowers, part of the Basket Bunch Bundle. This was one of the cards we made in the stamp club, and it really went together quickly!

The card base and die cut top are both Shimmery White. The sides of the card base were masked off with painter's tape so when the colors were sponged on, they wouldn't get into the margin where it would show once the top was on. We just buffed Calypso Coral and Wild Wasabi on the base, blending the colors together where they met.

The top piece (4" x 5-1/4") was die cut, having the die's straight edge about 5/8" from the top, the greeting was stamped in Wild Wasabi, and the ribbon was added. The whole thing was adhered to the card base with adhesive. Then the flowers were stamped in Calypso Coral on scraps of Shimmery White and a blender pen was used to draw color from the stamped lines into the petals ("color" using small circles). After touching the tip of the pen to the ink pad to pick up more ink, the centers of the flowers were darkened. Once they were die cut, they were popped up on dimensionals.

Seriously, it took me longer to write this than it did to make it!