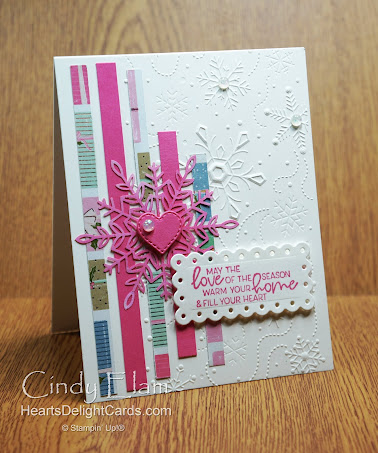 After several projects using the Whimsy & Wonder Specialty DSP, I had some scraps that were just too pretty to toss.... so I made this card! I colored the snowflake with a Stampin' Blend marker, but instead of placing it shiny side up, I did the back side to match the stitched heart. (I thought that heart kind of went with the sentiment.) 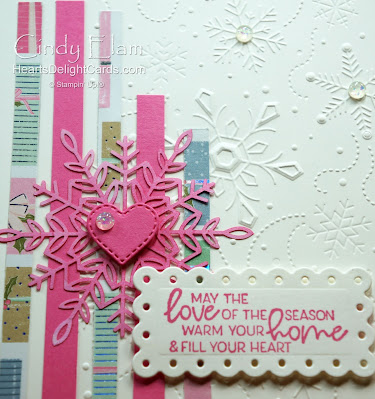 This is another of those non-traditional color cards, picking up the colors of the DSP. I wish the photos showed the iridescent shiny bits of the DSP better. It's subtle, but so pretty!

We've had a crazy couple of months here, one thing after another, capped off by a storm on Sat. the 7th that produced a lightning strike by our house. Scared the holy living bejeebers out of my husband, the cat and dog, and me!  It took out our power, TV, landline phone, and Internet. The power company got the juice back on within a few hours, but the rest of it didn't get restored until Wednesday. Because we live in a very rural area, cell service is spotty at best, and mostly non-existent. I tell ya, I never realized how much I rely on the Internet for keeping in touch with people, finding out what's going on in the world, and ordering things (ha!). It was a real eye-opener for me. All that to say there was no tutorial for Tuesday, sorry. Screen shot of my phone: 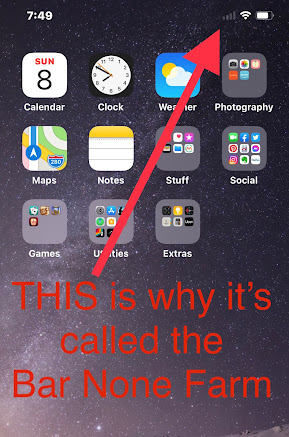 Give It A Whirl Dies

Multipurpose Liquid Glue
Add All to Cart
Posted by Cindy at 3:30 AM