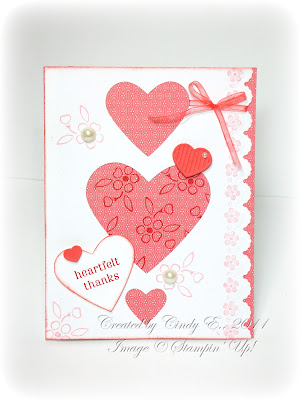 Mr. Brown brought my 2012 Occasions Mini catalog and 2012 Sale-A-Bration preorder last night, and even though I should have been doing other things, I couldn't resist trying out some of the new goodies (yes, I am weak....I admit it), and using as many as I could on this card without letting it totally out of hand.

Well okay, maybe I could have toned it down a little bit, but I really wanted to show as much as I could on this one card! We Stampin' Up! demonstrators aren't allowed to post the products themselves ahead of time, but we CAN make something with 'em, and share that. (Have I mentioned lately how much I love being a demo? Getting to preorder new things and create with them, before everybody else, is one of the MANY great perks of being a SU demonstrator!)

So, on this one little card, you will see five items from the Occasions Mini and two items from the SAB catalogs. The first thing you may have noticed are all the die-cuts. Yep, Stampin' Up! is coming out with Framelits - something akin to Nestabilities, only they're even better because you can see exactly where the die will cut, making image framing a piece o' cake!  We will also have Edgelits dies to cut fancy edges AND there are embossing folders for the edges to match!  And you might have noticed the two little embossed hearts. That's from the new Fashionable Hearts Embosslit - it's just like the Beautiful Butterflies Embosslit, only hearts! I {heart} hearts.